17 lessons in Supportership: Learning to sing in German 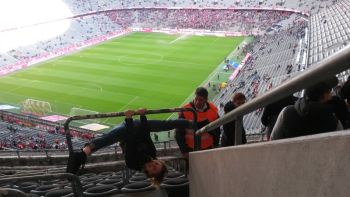 When we tuned into ”Leuchte auf Mein Stern” in the dying minutes of the massacre in Munich I couldn’t but remeber how a few years back learned the song and made the inhabitants of Stockholm question the state of my mental well being. Nowadays my CV states my Germans skills as BVB supporter songs. It hasn’t always been obvious I would be able to make that addition to my CV.

The tools for learning supporter songs in a foreign language are easily accessible. You need a smartphone, a workplace that lays about 30 minutes away, public transportation (driving a car takes too much of your concentration) and colleagues that are willing to step in.

Every morning during a few weeks as soon as I closed my home door, I opened the video of the song on my mobile, put my earphones on and pressed play. The sweet melody of black and yellow filled my ears and I started mumbling: “Im Jahre 1909 da wurd’ ein Stern geboren.” I tell you, it is not enough to listen to the text or just read it. I had to try singing along.

When people on the street took a step on the side while passing me, or a person in the metro moved to the next door opening to get some distance to the German mumbling morning rush traveler “Und man sah sofort an seinem Schein” I started telling myself that it was perfectly sufficient just to repeat the text in my head. “er kann nur aus Dortmund sein.” I promise you and myself that it wasn’t. It is much easier to correct a thought that didn’t follow a line than a mouth that is lost in “Dieser Stern der heißt Borussia”

I created some associations to help me to memorize the text. I apologize in advance for mixing in second league football teams and less graceful expressions. The team Greuther Fürth helped me to remeber “aus fürt”. “Von allen dort” leads my thoughts to dirt. The connotation might not embrace the beauty of the text, but hey I have to remember it somehow. “Und er leuchtet in Schwarz-Gelb”

When I arrived at my destination metro station “als schönster Stern von allen dort am großen Himmelszelt” I stopped the video running on repeat on my phone. It was time to test myself. As the song is three verses and a chorus long I had divided it in four individual clips and thus practiced only one of them at each time. You can imagine how inspiring it was to hear the twenty seventh thousand time “Und sieh hin hinauf zum Firmament”

It is one thing to sing the song only in my head and another singing it with my lips. The difficulty level could be raised by removing the lyrics in the background alltogether. “Auf den Stern den jeder kennt” You see I was practicing the song in order to be able to sing it to my friend, there wouldn’t be anyone joining me and I wouldn’t be able to lean back to the 25.000 Borussen in the Yellow Wall. “Spür ich seinen Glanz dann sag ich mir.” 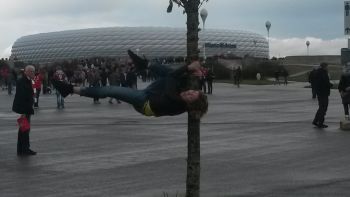 So when I had made it this far in my morning BVB routine the time in Stockholm was around 8.15 am. It’s the worst rush hour and I was in the middle of the city center walking with hundreds of others to my work place. With one exception. I was the only one singing, very quietly but still nevertheless singing. “Er ist auch ein Teil von dir”. The whole five minute walk I kept repeating the part I had been practicing in the metro “Leuchte auf mein Stern Borussia” increasing the volume the further away from the mass of people I got and the closer to my office I was. In the elevator, if I was there alone I would sing with not quite the same enthusiasm as if I was at the stadium but almost.

You might think it sounded weird that I needed my colleagues in my learning process. Where do they come in the picture? First of all I was hoping they would not report to my superiors that I had lost even my last functioning brain cell in case they run into me in the mornin rush. Bu teven more importantly they were my final test every morning.

On my way to get my first cup of tea (you read right, tea, A Finn who doesn’t drink coffee) I made few stops. On my first stop I jumped on my colleague’s desk, sitting I may add, and started “Leuchte auf zeig mir den Weg”” and sang the verse of the day to her. She applauded, told me she was impressed and even commented my ability to follow the melody which I by then already had mixed together with a popular country song. I felt pleased with myself and continued the long walk to the coffee machine.

One more stop, at the colleague who once failed miserably to calm me down when I was buying tickets through the BVB hotline. “Ganz egal wohin er uns auch führt” she used to look rather less amused than my first colleague but knowing there was no other way stopping me than letting me finish my song unless she has such bad headache that I could feel the pain by looking at her. I think most of the times she was left with a mild headache every time I exited her office. “Ich werd immer bei dir sein.”

And so, thanks to my hard efforts few years back last Sunday evening when all hope was long lost I was able to pour my soul out together with the other traveling fans to show our team we were not going anywhere, not even after a 5-1 humiliation.